For the record this is my first review ever so if you post something in the comments section go easy on me. I also should mention that I’ve played all the Heroes of Might and Magic games with the exception of the fourth entry in the series. Although word is it has excellent game play I could never get past the lackluster graphics and sound. But I digress….on to Clash of Heroes!

Breaking somewhat from its tactical roots this latest entry in the Heroes series’ biggest feature is a strong puzzle element which drastically alters the battle strategy. Originally Clash of Heroes was released on the Nintendo DS, but the version I’m reviewing here is the up-res rebalanced PSN version.

Let’s start with graphics since that’s what everyone tends to notice first. Despite being made for the handheld market the backgrounds look vibrant and free of pixilization. The 2-D sprite character and battlefield unit animations are smooth with portraits during dialogue sequences having a definite anime vibe to them. Personally I don’t mind this since it feels like a natural progression from Heroes V. Don’t forget that the original Heroes of Might and Magic had a very cartoon look albeit more western in flavor.

Sound effects are crisp and clear with various chimes and jingles conveying important cues during play. The music sets the mood quite well and feels very reminiscent of previous Heroes titles. Voice acting is sub-par, but thankfully only occurs during short inter-chapter cut scenes. The rest of the game, for better or worse, utilizes the classic RPG text scrawl.

The story is a mix of J.R.R. Tolkien and G.R.R. Martin. Five kingdoms are wracked by conflict and it’s up to a small group of youngsters to save the world. The narrative is split into chapters with each taking place in a different location. At times character arcs intertwine, but for the most part each is doing their own thing. If you have a soft spot for fantasy you might enjoy it. If not it’s easy to skim or skip your way to the action.

Of course the real draw of Clash of Heroes is its puzzle style battle system. By matching like units on the battlefield in rows or columns the player and his or her opponent can create offensive and defensive maneuvers. There are also a number of systems in place to encourage combinations as well as special units which bring their own unique abilities to the battle. Overall it’s a rich and deep set of mechanics that in order to master requires careful observation and planning. There are a number of in game tutorials to help ease you into the game though so don’t feel discouraged if puzzle games aren’t your forte. Additionally, some encounters feature brain game challenges that not only offer in game rewards, but also illustrate strategies which can be used in regular battles, something which can come in handy especially in later chapters. Rounding this out is the Hero himself (or herself), who has a unique magic power and possibly an equipped artifact that can influence the battle in various ways. 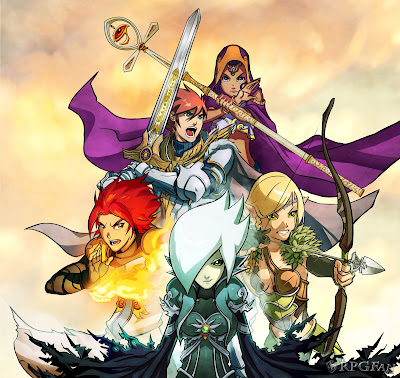 Outside of combat players can explore areas and interact with characters via a simple waypoint system. Gold and resources can also be acquired in order to purchase special units. Numerous aforementioned artifacts can also be found, although the hero may only use one at a time during battle.

Total playtime varies depending on whether or not you speed through the story bits and skip passed option side quests. However I think it’s safe to say it will take 20+ hours to finish the single player campaign. In addition to that you can go online and test you puzzle skills against real people if you have a strong competitive streak.

Overall I highly recommend this game to anyone who enjoys turn based strategy or puzzle games. At $15 it’s a bit pricy but one of the best entertainment to dollar value downloadable games to come out in recent memory. In truth my only strong criticism of Clash of Heroes is the frequent load screens. Considering that it isn’t a particularly graphics intensive game I felt mildly annoyed with how much time I spent staring at that rotating “Now Loading” wheel in the center of the screen.

Editor’s Note: I’ve heard that the Xbox360 version has shorter load times, but since I’ve only played the PS3 version I can neither confirm nor deny this statement.
Posted by Casey Goddard at 4:22 AM 1 comment: 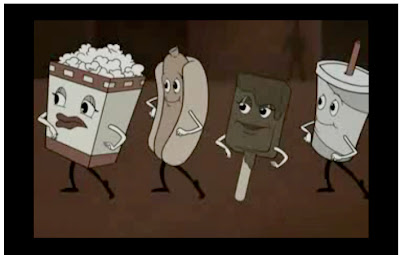 Ever noticed that the concession stands at movie theaters charge exorbitant prices for popcorn, candy and drinks? While I’m not an expert on the economics of running a movie theater I do know that this is a major source of revenue. So much so that many poorly run theaters could not stay in business if they did not sell a lot of overpriced junk food. So what does this have to do with video games? Well, it might surprise you but DLC very much fits into the same paradigm.

Probably the most obvious examples are things like theme packs, wallpapers and digital avatar accessories. You know…all that stuff that can only be enjoyed outside the game by the purchaser. It should be free, or at the very least come free with the purchase of the game it’s based on. Honestly, I can’t understand why people fork over hard earned cash for theme packs on PSN when a wide variety of totally free high quality themes are available for download off the internet.

Moving on lets look at DLC which at least has some in-game use. Recently (at the time of  posting) Rockstar games announced the availability of preorder DLC items for Red Dead Redemption at purchase price of a dollar each. Sounds cheap, right? However, what do you really get here? In all three cases you’re receiving a combination of built in cheats and texture skins. How long did it really take to produce this content? Modifying a couple lines of code probably took a programmer less than an hour. Maybe one of the texture guys spent a day or two re-skinning a horse, making those two gold plated guns look shiny and sticking an eye patch on your player character, but that’s it. Compare that to the hundreds of thousands of man hours sunk in to the main game and your looking at a price difference (assuming you bought RDR new) of well over 400 times the cost in terms of labor. Now, I know there’s more to it than that, but I don’t need to work on the game development team to tell you you’re getting ripped off.

Some of you might think the above paragraph was a bit math intensive for you tastes so I’ll give you an easier example of why DLC is all too often severely overpriced. Take for example Red Faction: Guerrilla (I’m in a “red” mood today). You can pick up this game for $20 through PSN or Xbox Live. Depending on how you play it will take you a little under 20 hours to complete the game. So, basically a dollar an hour, but wait there’s DLC! A prequel to the main game entitled Demons of the Badlands. Now, it will take at most five hours to play thought it so that should be around five bucks, right? Wrong! It’s $10, which is the same price as when it was first released unlike the main game which has been discounted over 60% since its initial release. One can’t help but think the publisher, THQ, is going for a movie matinee business strategy here. And don’t even get me started on map packs. They are the “free unlimited salty popcorn, but the drinks cost and arm and a leg” sales strategy of the video game industry.

I should end this by saying there is some excellent DLC out there, Red Dead Redemption: Undead Nightmare is one example that comes to mind and even the examples I named above aren't as bad as some of the DLC out there. But until gamers learn that nickels and dimes can add up to more than the perceived value marketing types would like you to believe it’s probably best to limit your online purchases to full indie titles. At least then you can feel good about helping out the little guy instead of some hustler in a suit.
Posted by Casey Goddard at 2:27 AM No comments: