Posted by Casey Goddard at 1:39 AM No comments: 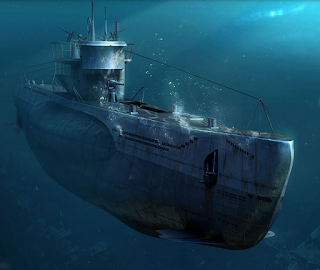 I've been a strong advocate on this blog for representation of submarine warfare in video games, and once more I'm taking up the (underwater) torch.  In this instance I really want to push for the inclusion of subs in World of Warships.  The developers over at Wargaming have gone on record saying there are no plans for this particular addition to the game.  I personally believe they could create a new and exciting dimension to the overall experience.  To start though, I'd like to address a common criticism leveled at submarines.

A lot of World of Warships players have express feeling on the official website forums that commanding subs would be extremely boring due to the slow speed at which these boats move.  It's a valid concern, but surface speeds of WW2 submarines tended to be between the Aurora and St. Lois.  When submerged, they go about as fast as the Bogue or Langley.  So, while slow they're no worse than ships already playable in the game.  It's also important to note that sub commanders need not chase down targets, rather they can let their prey come to them.

I agree that coding U-boats (and the like) into the game engine might present some programming difficulties, but if you approach diving underwater like a destroyer's smokescreen then the challenge might be surmountable.  The key differences are a diving consumable only affects the sub itself, has a countdown timer like the repair ability, and can be countered with acoustic sounding.  Once underwater, subs depend on batteries (that run down based on how fast the boat is moving).  Sitting still allows the sub to remain underwater longer, but makes it an easy target if located.  Additionally, it's should be impossible to end a game in a victory or draw when underwater (more on that later).  The inclusion of subs would also give destroyers (and certain cruisers) an expanded role in the form of anti-submarine warfare, not to mention new weapons like the depth charge and hedgehog.

Players start with cruisers at tier 1.  From there can expand out to destroyers at tier 2, battleships at tier 3, and aircraft carriers at tier 4.  Why not add subs at tier 6?  It's at a place where destroyers start to lose their effectiveness against other surface ships.  Here's a hypothetical example:

I want to toss out a few more ideas regarding subs.  Instead of commanding a single ship, how about a single player controlling a "wolfpack" via an RTS-style tactical map similar to the one aircraft carrier commanders use.  For such a player the pace of the battle might be more of a thinking-man's game, which might not appeal to everyone, but the same can just as easily be said for carrier gameplay.  I think a couple of other restrictions also have to be applied to submarines for balance reasons.


Of course, submarines aren't the only thing I'd like to see added to World of Warships.  New nations and their fleets aside, minefields that offer some risk/reward in the crossing could be exciting.  Night engagements with star-shells, spotlights, and lighthouse capture points would be great.  A.I. controlled coastal defense batteries or P.T. boats would be awesome.  Adverse weather conditions that affect visibility, speed and accuracy might be interesting too. There's a lot that could be added to the game.  For me though, the number one thing remains submarines.
Posted by Casey Goddard at 1:36 AM No comments: 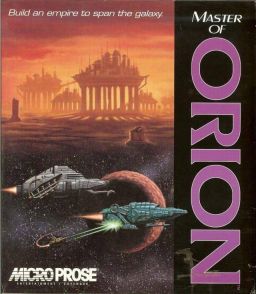 4X (eXplore, eXpand, eXploit and eXterminate) games have been in a rut for the last decade, if not longer, but recently signs have indicated that the genre is poised to make a resurgence.  No more apparent is this than Wargaming's recent announcement that they intend to reboot the "4X" name-maker, Master of Orion.

Purchased on the advice of a store clerk, Master of Orion was not my first exposure to the world of 4X games, but it definitely set the bar for all future entries in the genre.  That said, my first game was not very auspicious.  It mostly consisted of me trapped on my homeworld with the only other star in range being Orion.  Cue inexperienced me spending countless turns building up fleets only to have them smashed with impunity by the Guardian of Orion over and over again.  Later games went better, and at one point I tried out each race in a small galaxy (to completion) just to get a feel for each race.  For me, Terrans were the easiest since I won that game without having to ever fire a shot.  I also concluded that the Mrrshans were the most difficult race because when I played them the game ended with my complete extermination from a prolonged orbital bombardment by a xenophobic foe.  The rest of the races fell somewhere between those two extremes.  Needless to say, each game offered a fresh and exciting experience.  That, and the presentation which is thankfully being preserved in part due to the original art director and music composer working on the reboot.  Unfortunately, there seems to be some kind of conflict of interest going on.

The art director, Jeff Dee, has gone on record saying that even though some of the in-game playable races look similar to certain Earth animals the resemblance is supposed to be superficial.  Take the Bulrathi for example...they might have bear-like aspects to their appearance, but that's merely a consequence of the human tendency to associate the unfamiliar with the familiar.  Each race (aside from the Terrans, obviously) is really...well...alien.  However, some of the example video clips thus far show the aforementioned Mrrshan cat-people making lots of feline based jokes/puns which seems to run contrary to Jeff Dee's previous statements.  It's a bit worrisome, but that's not to say they shouldn't ham it up. 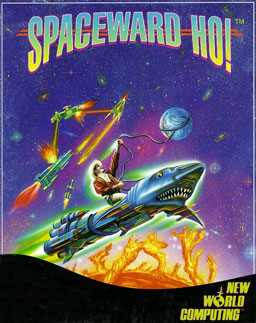 My very first 4X was Spaceward Ho!, a fairly minimalist turn-based strategy game with a goofy "wild west" atheistic.  Planets don cowboy hats once claimed, ships (depending on their configuration) can take the form of space-age sharks, or have the heads of dogs and wolves mounted on the front.  If a game goes on long enough for weapons tech to get extremely high the ship noses will look like real human noses...and that was fine with me.  I've always preferred the vibrant and slightly cartoony look of the original Master of Orion to its much more somber sequel.

Of course there are much bigger concerns as far as gameplay goes, particularly how space battles are handled and the overall competence of the A.I.  Personally, I'm hoping for more decisive fleet engagements than what we've gotten thus far in the franchise, but we'll just have to wait and see how things turn out.  Until then I'm keeping my fingers crossed.

Posted by Casey Goddard at 2:15 AM No comments:

2015 isn't exactly over yet, but I'd like to take a moment to talk about three games of note that have been pushed back until next year.

A Kickstarter project that has been funded and in development for almost exactly to years now, Hyper Light Drifter shares DNA with the like of the Zelda franchise.  The key difference being this game has a bit of sci-fi mixed in with the fantasy.  While I'm glad the game has a set release date, it feels like this should have come out this year.  It's understandable though given the creative director's heart condition and the relatively small size of the team.  Plus, the preview build sent to Kickstarter backers suffered from an inexplicably poor frame rate.  So, hopefully they'll have enough time to get that ironed out before the full release.

XCOM 2 coming out this holiday season sounded too good to be true when it was announced during the reveal trailer, and...surprise!  It turns out the release date was far too optimistic.  Supposedly the reason for the delay has to do with the developers wanting to increase the replayability of the game.  That's part of the reason, I'm sure.  My gut instinct tells me that the rest has to do with cleaning up buggy code and time to give the console ports developers a chance to catch up to the lead platform on the PC.  Regardless, I'm still looking forward to playing the game when it finally does come out next spring.

With regards to games made by Naught Dog Studios, I prefer The Last of Us to Uncharted.  That said, I'm still looking forward to Uncharted 4.  Not so much in a binge-play-it-to-the-finish-for-the-story kind of way, but more for the technical aspects of the game.  In all likelihood the graphics on display in this PS4 exclusive title will be the best yet for Sony's current gen home console.  In other words, I'm more curious to see the hardware potential of the PS4 than the ultimate fate of Nathan Drake.  If anything, the delay just means more polish will be applied that what would have otherwise been had the game come out this year.

So, those are just a couple of games set to hit store shelves (and digital marketplaces) early next year.  It's a bummer having to wait longer than expected, but overall at least it isn't as bad as 2014.  It seemed like the majority of games originally planned to come out that year were pushed back to this one.  Now if only we can ensure that delayed games don't launch in a broken state...
Posted by Casey Goddard at 5:40 PM No comments:

The Consequences of Failure 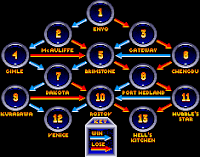 Generally speaking, video games differ from reality in a number of ways, but of those, one of the most prominent has to be the "failed state."  More often than not, losing equates to death.  Granted, there are usually mechanics to partially negate this harsh penalty in the form of a save system, checkpoints, continues, respawns, etc.  Outside of Rogue-likes, perma-death is pretty rare.  Almost as rare in a single player experience is the notion of a game proceeding after failure.  Let me pose the following question, What if the player's on-screen avatar survives, but is unable to complete whatever goal the game designers expect them to accomplish? 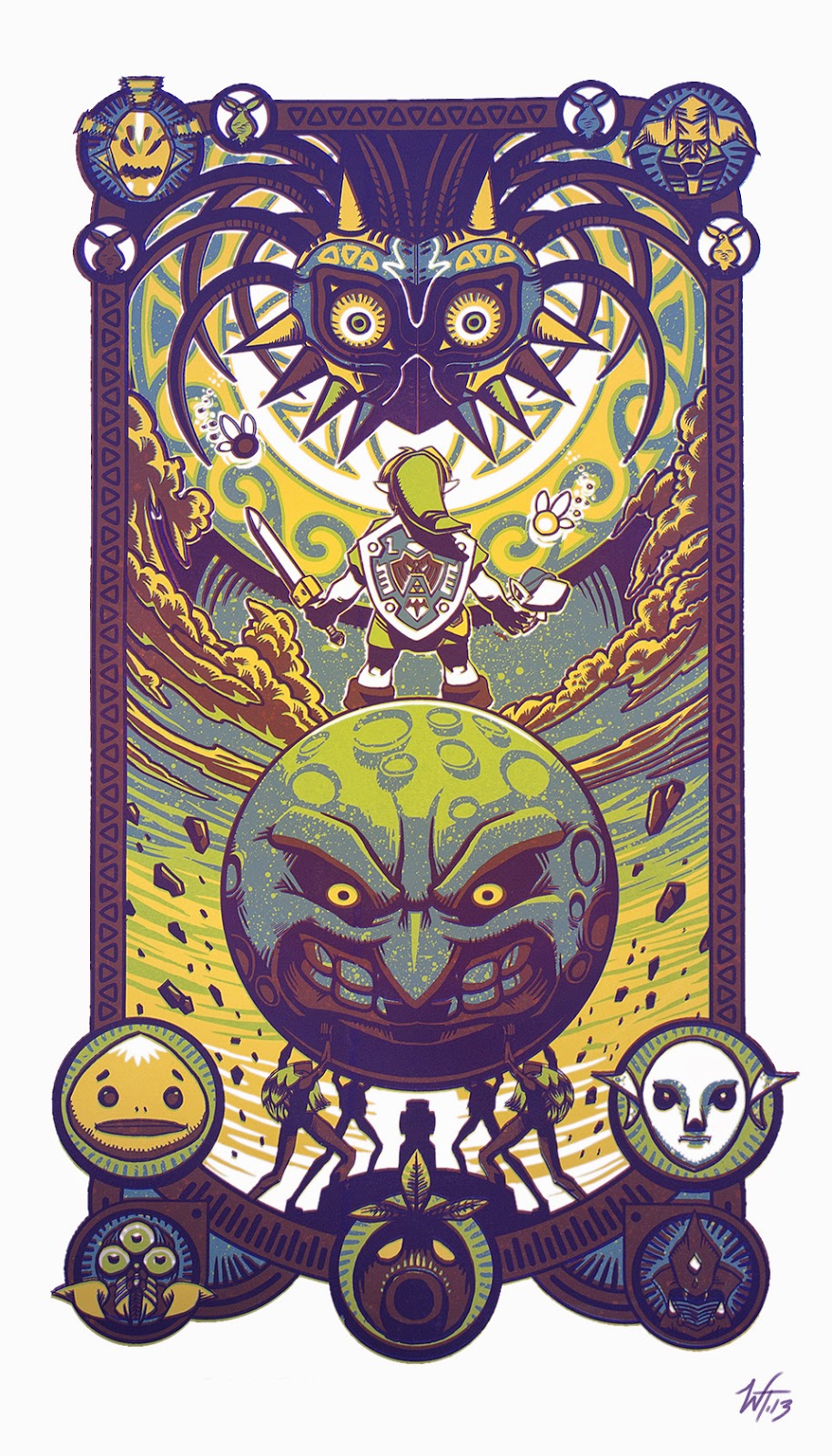 The overwhelming majority of the time players are simply slapped with a "mission failed" message which necessitates a restart.  Almost as if the player were an actor on a film set and the movie director yells, "cut!" over and over again while demanding a scene do-over.  Not every game embraces this concept fully though.  When it comes to reality you win some and you lose some, but regardless life go on.

Based on the above axiom it comes as no surprise that simulation games, particularly combat flight-sims, were one of the earliest examples that I'm aware of that accounted for the possibility that you could lose some battles, but still win the war...or at least survive to the conclusion of hostilities.  There also seems to be a tendency for games that don't do "game over" screens to operate in a small area with a narrowly bracketed time frame.  I know that's awfully vague and, depending on how you define it, a lot of games that sound like a good match (such as Way of the Samurai or Majora's Mask) don't really fit.

The fundamental benefit of narrowing down a time and place is it allows game developers to trade breadth for depth. The two previously mentioned examples inch toward the concept, but stubbornly cling to a directorial series of events. To some degree, I get why they do this. Even if you make the exchange, developer resources are still finite.  It's a problem Telltale is well aware of, I'm sure.  Still, I think the more than can be influenced by the player's actions, the better.  It's like that movie "Groundhog Day" except instead of passively watching Bill Murray's character experimenting with various possible outcomes, the player actively gets to do so.
Posted by Casey Goddard at 1:28 AM No comments: